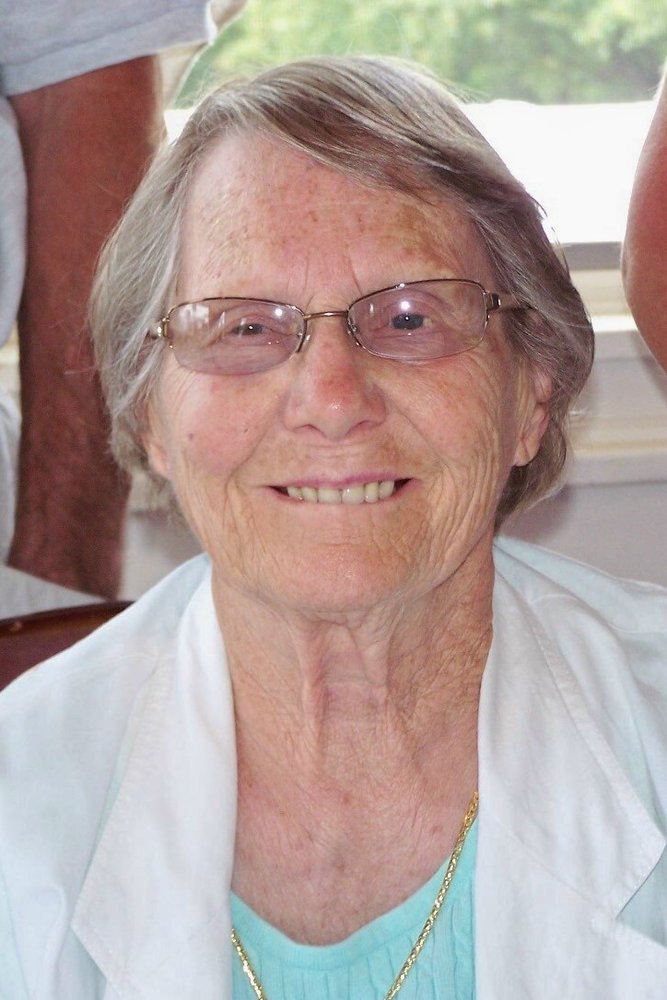 After 5 months, we have scheduled a belated "Celebration of Life" for Jan Klitch on June 3, 2021 at 10 AM at the Methodist Church in Old Town on Stillwater Avenue, followed by the scattering of her ashes in the Penobscot River at the Old Town boat launch (also known as "Fourth Street Park").

Janet C. Klitch, 88, of Old Town, Maine, died Wednesday morning, November 18, 2020. She is survived by her daughter Betsy (David Schultz), son Timothy (Marjorie), five grandchildren, and five great-grandchildren (with another on the way!). She leaves behind countless community friends, many of whom think of her as their other Mom.

Jan was a hard worker, generous volunteer and rarely said no when asked. She lived an extremely full and rich life.

Born in Newton, MA, she earned her RN at Faulkner Hospital School of Nursing. At age 60 she graduated from the University of Maine with a BS in Community Health Education, while working full time as the district school nurse. She also earned her state and national School Nurse Certifications.

After she married Leroy J. Klitch in 1952 they moved to the Greenville Air Force base in Mississippi. They hoped to relocate to Greenville, Maine, a spot marked by blindly touching the map of Maine. No airport work was available closer than Central Maine Flying Service, now Dewitt Field, so they moved to Milford, Maine in 1956.  She moved to Old Town in 1958 with her husband, daughter Betsy and son Timothy and never left her favorite town.

Jan helped found the MOLMUTOC Club, which stands for Make Our Lives More Useful To Our Community. It celebrated 25 years in 1984. Clearly, if anyone embodied this goal, it was Jan. Its service activities helped people from infants to seniors, provided holiday baskets, gave scholarships and more.

In 1994 she was awarded the Governor’s Award for Alcohol and Drug Prevention and Education.

Her Candy Cane Nursery School operated from her home. It was the first local preschool in 1958. Numerous graduates over the 19 years it operated have thanked Jan for helping prepare them for life, even after they left for kindergarten. Countless Old Town School District students benefited from her 16 years of service and advice as their only school nurse. As a notary public, she performed marriage ceremonies, including those of both her children. She was a co-director and swim instructor for a Girl Scout camp, worked as Old Town’s city Health Officer and as a paramedic for life insurance companies.

Old Town benefited over many decades from Jan’s service on the school board, the city council, including as mayor in 1976, the Old Town Economic Development Committee, the Old Town Action Group, as an officer on the River Coalition and the C-3 Objective group. She taught CPR and First Aid classes to the community, helped at the Food Pantry and as a docent at the Old Town Museum. In 1975 she founded the first Flying Club at Central Maine Flying Services, now Dewitt Field.

She was a trustee with the United Methodist Church, served on the Ronald McDonald House Board of Directors and as a substitute manager. She was an active supporter of the Animal Orphanage and Honorary Co-Chair for their building committee, ushered at the UMO Performing Arts Center, was a Special Olympics age group leader and a Healthy Heart Program counselor for Eastern Maine Medical Center.

She was a private pilot. She had a motorcycle license. She sailed. She cross-country-skied. She canoed. She fished. She gardened. She loved with all her heart.

Jan made, and kept, friends wherever she went – and she did plenty of traveling! She loved to “take the road less travelled” and drive down the back roads just to see what was there. As amazing and capable as she was, she treated everyone as her equal. She was not shy about striking up a conversation with anyone. You couldn’t go to Hannaford’s with her without running into SOMEONE she knew. She loved animals and always had a cat or a dog, but also allowed her family other pets like horses, a lamb and even an orphaned raccoon.

Jan could make anything fun. She acted in community theater productions, learned to square dance in the 60’s, loved playing cribbage, Rummikub, Scrabble, bridge and other games with her friends and family. When she visited her great-grandchildren in Colorado, she’d engage them in a game inventing uses for her cane (a bat, a dance prop, a hook for grabbing things, a remote-control button pusher…). She was “up for anything,” even trudging through the cold to enjoy some holiday lights at the Anheuser Busch brewery, followed by a little malt-based refreshment. She loved music and performed in several local bands, including “6 Basin Street,” playing drums, trombone and trumpet.

And Jan loved to learn, to experiment, to try to fix anything mechanical or otherwise. She was one of the early adopters of a Radio Shack personal computer in the early 80’s and had one of Old Town’s first solar homes built.

Her family considers her the best of all Moms!

A “Celebration of Life” will be held on June 3, 2021, at 10 AM at the Methodist Church in Old Town on Stillwater Avenue, followed by the scattering of her ashes in the Penobscot River at the Old Town boat launch (also known as "Fourth Street Park").

Memorial Gifts can be directed one of the following charities:

Condolences can be shared with the family at cremationbasics.com

Share Your Memory of
Janet
Upload Your Memory View All Memories
Be the first to upload a memory!
Share A Memory