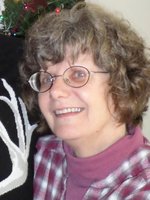 Terri Lynne (Hooper) Campbell, 62, joined her late husband Willie in heaven on May 6, 2020. Terri was born on February 18, 1958 at home in West Rockport, ME to William Ruel Hooper, Sr. and Patricia (Dorrie) Hooper. She graduated from Machias Memorial High, and soon after became a civil servant for the naval base in Winter Harbor where she met her adoring late husband. They were married at Nealley’s Corner Church in 1985 and soon after moved their family to Hancock, ME where they became devoted members of the Ellsworth Church of the Nazarene. After her civil service Terri went on to become a bookkeeper at Lobster 207 in Trenton, where she met friends who became a family to her. Terri was beloved by all who had the opportunity to meet her as she opened her arms and heart readily. Bringing joy to peoples’ lives through her writing was one of her favorite pastimes, as well as spending time with family, reading, and riding around the state behind her loving husband on their motorcycle. Terri will be remembered for her quiet strength, unprejudiced compassion and endless love. Terri is survived by her only child Lucas William Campbell and his wife Alaina (Loftus) Campbell, mother Patricia (Dorrie) Hooper, sister Amy Sue Hall, sister Jennifer (Hooper) Tuell and her husband Wayne, father-in-law Donald Campbell, sisters-in-law: Ty Bishop, Diane Nute and husband Jim, brothers-in-law: Bud Campbell and wife Melanie, Doug Campbell and wife Marie, Peter Campbell and wife Sonya, and Matthew Campbell, as well as many nieces and nephews, cousins and friends. Terri was predeceased by her husband of 35 years, William Fredrick Campbell II, her father William Ruel Hooper, Sr., and brother Bill Hooper, Jr. A celebration of life ceremony will be held at a later date when we are able to plan a gathering. Condolence messages may be shared at cremationbasics.com